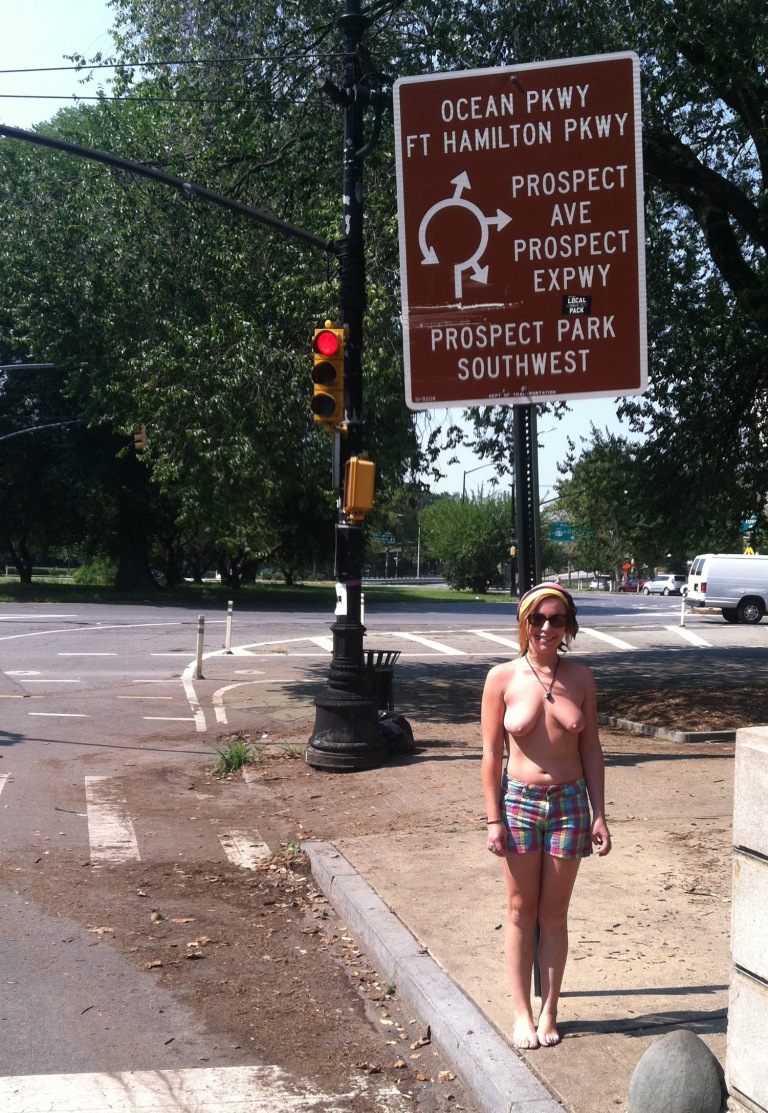 I walk bare-chested because I enjoy the feeling of freedom I experience while doing so.  The term topfreedom was coined in 1986 by Ramona Santorelli, to describe the idea that women and men should be treated equally under the law, and that women should be allowed to go bare-chested where men may do so.

There are many valid, non-sexual reasons for people to go bare-chested.  Evidence of this exists in the neutral attitudes most Americans have toward male bare-chestedness, and the fact that virtually no laws exist to limit men from going bare-chested in public.   It is a freedom men value and we do not protect society from men who wish to exercise this freedom.

Women going bare-chested in public is not actually new, but in some places it feels quite new, and when people see a bare-chested woman they naturally search for her motivations for doing what they perceive to be an unusual thing.  Given that the female body is hyper-sexualized in American culture and many other cultures, it can be difficult for people to look beyond sexuality when trying to guess a woman’s motivation for going bare-chested.

A commenter recently wrote about my M Street video that a female walking bare-chested on the street is exhibitionism.  She was respectful in her tone and I respect her opinion and appreciate the time she took to consider my blog and write a comment.  I love having conversations with people because it spurs ideas and understanding, as this one did.

Exhibitionism has two primary definitions.  The first is simply behavior intended to attract attention to oneself.  The second describes a psychiatric disorder or mental condition characterized by a compulsion to display one’s genitals in public, often deriving sexual pleasure specifically from shocking people who were not expecting to see said genitals.

So in the first regard, of course, posting a video of me walking through Georgetown, Washington D.C., is by its very definition exhibitionist.  Every video on YouTube is exhibitionist in that regard.  If people didn’t want attention, they would not have posted the video in the first place.  My intention in making and posting my video was to bring attention to my walk, and particularly and paradoxically to the fact that the majority of passersby didn’t pay much attention to my walk!

The commenter didn’t elaborate on her definition of exhibitionism, but for the sake of argument let’s imagine that she meant my bare-chested walk was sexually exhibitionist.  The easy answer is to simply refer her to the definition and point out that breasts are not genitals.

But beyond that, let’s examine the idea that female bare-chestedness is sexual exhibitionism.  Like disorderly conduct and indecent exposure, sexual exhibitionism requires intent.  For example, a person who gets his clothes ripped off by a tornado would not be guilty of indecent exposure.  He must have the intent to expose his genitals and furthermore, to arouse sexual feelings in his observers or himself.  A woman being stung on the genitals by a bee would not be guilty of indecent exposure for removing her shorts to remove the bee.  Her intent was not sexual.  Likewise, disorderly conduct requires a person to be intentionally disturbing order, by purposefully impeding traffic flow, for example, or playing loud music in the middle of the night in order to upset people.  A person who trips and falls in front of a crowd is not being disorderly, even if traffic backs up as a result.

So declaring a bare-chested woman a sexual exhibitionist (again for the sake of argument ignoring the fact that breasts aren’t genitals) requires 1) breasts to be defined as inherently sexual and 2) a denial of the existence of any non-sexual motivation for a woman to go bare-chested.

Given no real way to prove a person’s intent if that person does not state an intent, I find a real kernel of insight when people immediately assign an exhibitionist motivation to female bare-chestedness.  Just because people react a certain way to a person does not mean inciting that reaction was the person’s motivation for making the behavior.

I primarily walk bare-chested because I enjoy feeling the sun on my skin, and secondarily because I am working to normalize female bare-chestedness so other women can feel the same joy I do.  My primary intent is personal comfort.  My secondary intent is to promote societal and political equality.

My intention is not to incite sexual pleasure or thoughts in myself or others.

Yet sometimes people will deny this explanation and say basically, nope.  I don’t believe you.  You are walking bare-chested to get sexual attention, feel sexual pleasure, elicit sexual reactions in others, etc.  Nothing I can say or do will convince some people that a woman can walk bare-chested for non-sexual reasons.

My blog exists to enable supporters of topfreedom to feel informed and to share ideas that will help normalize female bare-chestedness.  I believe a large and growing number of people have accepted the idea that women can in fact appear bare-chested for many valid reasons.  Some people have not.

I do think we apply more negative energy to women receiving attention than we do to men.  Consider the disparate reactions to male and female soccer players whipping their shirts off in celebrations. or the judgment successful professional women receive (cold bitches or absent mothers), while their male counterparts are seen as focused or driven for the same behavior.

The fact that society does not judge or criminalize men for going bare-chested to win sexual attention even though many do (cough cough, Jersey Shore) is a whole other conversation…

70 thoughts on “Topfreedom, Exhibitionism and Intent”